Macvin! Macvunderful! A wine that stands up to the heat

When I took the French Wine Specialist course last year, one of the wine regions that fascinated me the most was The Jura, an increasingly ‘it’ region, nestled in the foothills of the alps, just over the Swiss border, with interesting varieties and renowned for its uniquely oxidized crown jewel, Vin Jaune (also home to Louis Pasteur and Louis Vutton … and the area that gave ‘Jurassic’ its name). I marked The Jura on my wine ‘spit’ bucket list as a must visit, but not on this summer’s Euro trip as my Burgundy/Rhone/Provence itinerary was too crowded.

The impetus for my trip was a wedding in Montreux Switzerland and it was from that glorious Lake Geneva-side base that I set out for Beaune, Burgundy, in a rental VW Golf and with an “In GPS I Trust” motto. Unbeknownst to me, the GPS default was set to avoid toll roads and what should have been a relatively simple trip on a couple of motorways, ended up taking me through alpine foothills and tiny Swiss, and then French, villages. 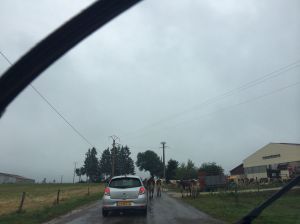 alone in a foreign country, don’t speak the language and no idea where the hell I am – not to mention a GPS system that told me to bear left when there was no left in sight, asked me to estimate distance in meters (huh?), kept demanding I ‘cross the (sic BLOODY) rotary,’ and, on occasion, brought me to a T-junction with no directions at all — all of which sorely tested both my motto of trust and the breadth of my vocabulary of expletives.

Nevertheless, there was a mystical charm in driving on those tiny roads past chalets, and up and down mossy hills, in a downpour that occasionally gave way to a spray of sun rays, lighting up the lacy fog that shrouded the green countryside, and its medieval villages, like the diaphanous veil worn by the beautiful bride I had just seen wed.

About an hour after I crossed the Swiss border (where I was ignored completely by the insouciant guards, even though I was proudly brandishing my Euro passport) and had descended a ripple of hills, I stopped at a large roadside supermarket/café. On a search for a bottle of water, I bumped into an extensive wine section where, to my surprise and delight, I found row after row of Vin Jaune, Macvin du Jura, varietally labeled Arbois Chardonnay, Pinot Noir, Trousseau and many other wines of The Jura.

Well, of course, I had seen signs for Arbois (important Jura AOC since 1936 and one of the first AOC designations) on the rotaries (roundabouts), without registering it, I was so focused on my destination and not missing a turn. And yes, as it happened, I actually had been traversing The Jura – Those villages! Those hills! That green-laced mist! I decided that although I had no time to explore, the least I could do was to buy a bottle of Jura wine in its home base, so I chose a bottle of Macvin du Jura (17 Euros) as I had never tried it.

In my rush to unpack the car when I arrived in Beaune, I completely forgot the bottle of Macvin, which had rolled under the seat and, over the next four days, as I sampled my way through the vineyards of Cote du Nuits, Cote de Beaune, and Chateauneuf-Du-Pape in temperatures that, on occasion, rose well above 100 degrees, that bottle of Macvin lay forgotten and boiling under the seat. It wasn’t until I arrived at the tranquil, lavender-rimmed villa friends had rented in the hills of the Cote d’Azure in Provence, that I belatedly remembered that bottle.

One afternoon, lazing by the pool, in the mood for an appertif, and too deliciously lazy to walk or drive the mile into the nearby village of La Garde-Freinet for a bottle of Cotes de Provence, I remembered the Macvin and, though assuming it was beyond drinkable given its trial by fire in the car, suggested we give it a go. I opened it up and poured the golden, slightly glycerol liquid over ice cubes. And, what a complete surprise: it was delicious.

Would it have had more nuance, more delicacy if it had not boiled in my car? Who knows? It is an enduring wine, with six centuries under its belt … a Vin Doux Natural (French fortified, i.e. added alcohol, wine). Fortified wines (Port, Madeira, etc.) originated centuries ago when wine merchants added brandy to their wines to preserve them against drastic conditions on ocean voyages. So, although mine did not cross the Atlantic, or even the English Channel, it proved its backbone on my voyage… after all, the Aussies cook their Rutherglen Muscats in blazing hot tin sheds and the Madeira-ites cook their wines in oven-like estufas, why not a bit of a cook-up in my little VW Golf?

But, unlike those wines, this one did not taste the least bit madeirized – there was no caramelized or burnt flavor – and it retained a surprising delicacy of aroma and palate – orange rind, grapefruit, candied fruits, quince and almonds with a whiff of earth – and had a refreshing bite of acid through its sweetness, plus a nice hint of bitterness. And, with its high alcohol content, it packed a gentle buzz, in perfect harmony with the serene buzzing of the honey bees hovering around all that Provencale lavender.

Macvin is made from late harvest grapes (i.e. high sugar content). Macvin Rouge (or Rose) is usually made from the native Ploussard, although any of the AOC authorized reds (Pinot Noir, Trousseau) can be used; and Macvin Blanc is usually made from the flagship white grape of the Jura, Savagnin Blanc (NOT to be confused with Sauvignon Blanc), but often includes Chardonnay. Macvin is made by adding marc – a brandy made from pommace (post-press skins, pulps, seeds of the grapes, although in this case, just skins and no stems) – to grape juice, which has been placed into oak barrels. This halts the fermentation (a process called ‘mutage’) because the alcohol in the marc kills  yeast, arresting the transformation of the remaining sugar into alcohol (hence the sweetness), all while raising the ABV anywhere from about 16 – 22%.

Compared to the Vin Doux Naturals I have tasted, this one (which was 100% Savagnin) was more off-dry (which in wine parlance means a little sweet) than luscious; brash yet delicate, and incredibly refreshing – more heft and complexity than, say, a Lillet, but with that appertif’s elegance, and far less unctuous than a Banyuls.

It proved a terrific match for whatever we found on our plates late afternoon … from creamy, weeping cheeses with just the right amount of funk, to tartly brined, multi-colored herbed olives, to fragrant melon and the heavenly, pillowy nougat we found at the local market: all in all, an excellent way to toast the brilliantine sunsets that splashed across the layers of mountains and valleys on the horizon.

In the end, my GPS had done me a favor, giving me a glimpse of the landscape of the Jura and acquainting me with an appertif that is destined to become a permanent fixture in my ‘cellar’ (‘they’ say it can age for 25+ years).

Home in California, I am eager to get my hands on another bottle. A little research on winesearcher.com shows that, while not exactly ubiquitous,  Macvin du Jura is available around the US. For example, in LA, my local wine store, The Wine House, lists Labet Macvin du Jura at $29.99 a bottle… but I have not found the probably far from top-of-the-line, but lovely, version I purchased, Macvin du Jura Caveau des Jacobins, any where but on a French website at 14 Euros.

And so, in the golden evenings of a waning Los Angeles August (if I can get my hands on a bottle!), I look forward to a slice of perfectly ripened cantaloupe and an equally ripened soft cheese (Red Hawk from Cowgirl Creamery?), matched with a chilled glass of the golden liquid, dressed with a thin slice of blood orange and a sprig of lavender: the perfect embodiment of those fragrant evenings I spent with dear friends in Provence, watching the sun slip behind the lavender as we sipped our VW-baked Macvin du Jura.

Coming soon: Burgundy, the Lavaux in Switzerland, the soils of Chateauneuf-du-Pape, the heavenly Finger Lakes and a meditation on hybrids … are they ‘crap’ or can they actually be crazy good?